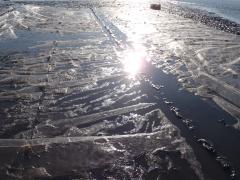 Clams, as a general term, can be used to describe any bivalve mollusk species which buries itself in the sediment.  There are numerous commercially important clam species within the United States, though the one most recognized and utilized in shellfish aquaculture operations on the East coast is the quahog or hard clam (Mercenaria mercenaria).  The hard clam naturally ranges from the Southern Canada to Florida, where aquaculture production of this species was valued at over $60,000,000 in 2005 (2005 Census of Aquaculture).  On the West coast, clam aquaculture operations focus on the Manila clam (Venerupis philippinarum), with 2005 production valued at over $19,000,000 (2005 Census of Aquaculture).

To focus on the clam species with the largest level of production, the hard clam uses a strong muscular foot to burrow into sediment and then extends inhalant/exhalant siphons to the sediment-water interface allowing it to filter feed phytoplankton from the passing water.  Since clams are an infaunal species (living in the sediment), aquaculture operations typically involve placing the clams on the bottom at some point as they grow.  Typical hard clam aquaculture operations will purchase small seed clams from hatcheries which specialize in the spawning and care of young shellfish through the fragile larval phases.  Since small clams are the most vulnerable to the many predators of the marine environment, a nursery system is usually employed to start.  A nursery system may involve a floating or land-based upweller system, or a nursery box with appropriate sized mesh for deployment at the aquaculture site.  As the clams grow and reach a “field plant” size they are most often planted and allowed to dig into the sediment of runs covered by mesh or net, or they can be placed in mesh bags on the bottom for grow out.  Any mesh or netting used to protect the clams must be maintained to ensure water continues to flow over the clams for respiration and feeding. 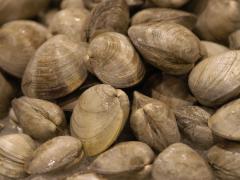 Hard clams can be harvested by lifting the mesh bags they were grown in in off the bottom, or they can be raked out of the sediment with tuned bull rakes (when wet harvesting) or hand scratching rakes (when dry harvesting).  Larger mechanized equipment such as hydraulic dredges may be available for harvesting larger areas of cultured clams.  One of the interesting things about the clam market is that they are most valuable when harvested and sold at the smaller end of marketable size range, most often called little necks (about 1” in shell height and less than 2” in length).  Clams remain marketable but at lower values at the larger sizes of cherrystones (intermediate size, 2-3”) and then chowders (biggest, >3”), though specific size classifications may vary a bit by location.  The more valuable little necks may be further divided to count necks or pasta clams (smaller sized little necks) or top necks (larger sized little necks).  A number of other clam species have commercial value and are either being cultured or are candidates for aquaculture including: soft-shelled clams or steamers (Mya arenaria), surf clams (Spisula solidissima), razor clams (Ensis directus), and ocean quahogs (Arctica islandica).  As culture methods improve for these species the clam aquaculture industry will likely continue to grow and diversify.

How to Buy Clam Seed without Getting Shucked (pdf)

Clams to Cash, How to Make and Sell Giant Clam Shell Products (pdf)

Effects of Geoduck Aquaculture on the Environment (pdf)

Geoduck aquaculture, Estimated Costs and Returns for Subtidal Culture in BC (pdf)