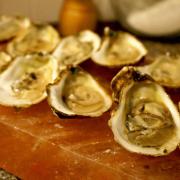 Oysters are a very nutritious and well-balanced food. While there are more than 200 oyster species around the globe, only a fraction are edible. The most well known edible oysters include eastern oysters, Pacific oysters, European oysters, and Sydney Rock oysters.

The food history of oysters dates back to prehistoric times as evidenced by shell middens in coastal areas. During colonial times and the 1800s oysters were a food staple so common that street-side vendors in major cities sold the delectable bivalve mollusks to passers by. Oysters became more of a specialty food in the later part of 20th century; however, with today’s growing interest in healthy and sustainable foods, the oyster is once again becoming a preferred food choice for many consumers.

Most oysters grown and sold in the United States are either Pacific oysters or eastern oysters. Pacific oysters, originally from Asia have largely replaced native oysters along the west coast. Eastern oysters are native to Atlantic coastal areas from Maine to Florida and the Gulf of Mexico. Adapted to a wide range of salinities, oysters can grow in the mid to upper parts of estuaries where salinity can be moderate to low and in high salt inshore coastal lagoons and waters. Like grapes, the flavor of an oyster can change measurably from one area to another and seasonally reflecting the unique conditions of the waters where they live. 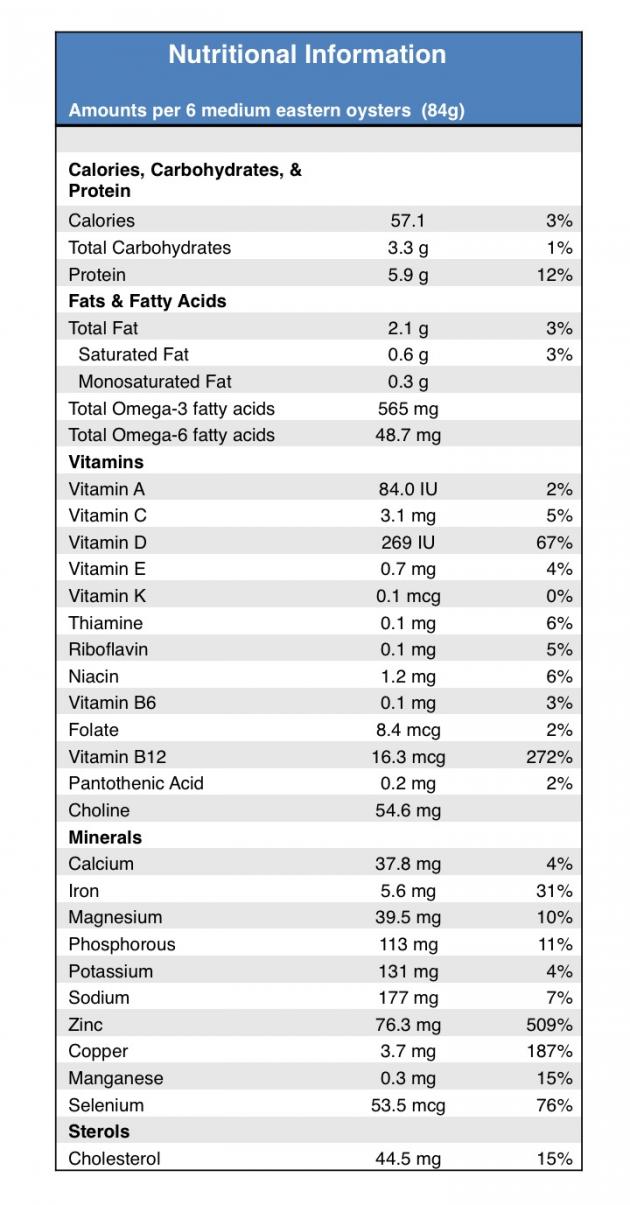 Regardless of whether an oyster is briny or sweet the health benefits are numerous.  Oysters are low in fat, high in protein, and an excellent source of omega-3 fatty acids and vitamins D, and B12. Fewer than six medium oysters will supply your daily allowance of essential minerals such as iron, zinc, magnesium, phosphorous, selenium, manganese, and copper. A more complete list of nutrients for a serving of 6 medium eastern oysters is shown below.

Beyond their nutritional benefits, oysters provide many important benefits to the environments where they grow both improving water quality and providing important habitat for a variety of organisms. Additionally, whether harvested from wild populations or farm-raised oysters are a sustainable seafood product.

Consumers should be aware of proper handling methods and purchase oysters from a reputable seafood seller. It is important to keep oysters refrigerated prior to use. Oysters can be refrigerated dry in breathable containers.  Make sure oysters are alive when purchasing and preparing.  Live oysters will have tightly closed shells and when tapped together will have a high-pitched clang as opposed to a hollow thud.  Some might say you should only eat oysters during the  “R” months; however, this saying dates back to a time when refrigeration was limited and is no longer applicable.  Today, oysters are widely available and eaten year round.

On a cautionary note, though oysters are carefully regulated to ensure that they are harvested from clean waters and handled properly during packing and distribution, oysters can harbor naturally occurring bacteria that can be harmful to humans.  Certain bacteria in the genus Vibrio can become elevated during the summer in oysters grown in some areas. Oysters containing elevated levels of Vibrio, when eaten raw can cause illness. Serious illness can result in individuals with cancer, liver disease and other immune compromised conditions. Such individuals should consult their physicians before including oysters in their diet.

Source: Nutrient data for this listing was provided by USDA SR-21 and http://nutritiondata.self.com/facts/finfish-and-shellfish-products/4189/2. Percent Daily Values (%DV) are for adults or children aged 4 or older, and are based on a 2,000 calorie reference diet. Your daily values may be higher or lower based on your individual needs.