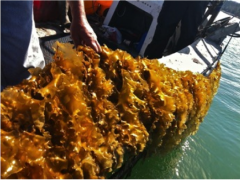 The seaweeds (or sea vegetables) are a large and diverse group of marine macroalgae that can be found in intertidal and subtidal coastal regions around the world. Like land plants, they utilize photosynthesis to convert inorganic nutrients into organic biomass, an important link that provides food, shelter, and habitat for other organisms. Seaweeds are simple in their structural compositions because they take up nutrients into their blades or fronds directly from the seawater, unlike more complex land plants which take up nutrients through their roots. There are three different groups of marine macroalgae—red, brown, and green. They are grouped according to their unique photosynthetic pigments, which give them their characteristic colors and unique properties.

Coastal people around the world have used seaweeds for food, fodder, fuel, extracts, medicine, and agriculture. Seaweeds can be used directly as food or fertilizer, or indirectly as extracts. Phycocolloids are thickening, stabilizing, and gelling agents, extracted from the cell walls of certain seaweeds for use in a wide range of consumer products. Agar, carrageenan, and alginate are important ingredients in manufacturing, biomedical, and food industry processes. Seaweeds are high in trace elements, vitamins, and unique bioactive compounds, making them highly nutritious for people, animals, and plants. Traditional dishes made with local seaweeds can be found in almost every coastal area, with the highest consumption in Asian cultures. The popularity and use of seaweeds in Japan led to the development of the seaweed aquaculture industry as demand exceeded natural supply.

The first seaweed farmers set out substrate in the form of brush or rocks to increase areas of natural set for seaweed, or ‘weeded’ competing species to encourage growth of a specific crop. Today, the seaweed aquaculture industry in Asia produces millions of tons of seaweed on extensive sea farms. Different species of red and brown seaweeds are cultivated on long lines for food or for their phycocolloid extracts. While Asia is the leader in seaweed cultivation, other countries are beginning to develop culture techniques for their native seaweeds. Canada has been a leader in developing seaweed culture techniques as a part of integrated multi-trophic aquaculture (IMTA), where fish, shellfish, and seaweed are all grown together in an ecologically-based aquaculture farm design. In the United States, a new seaweed aquaculture industry is being developed in New England, where native species of red and brown seaweeds are being cultivated for sea vegetables and for nutrient bioextraction. As the awareness of the versatility and nutrition of sea vegetables increases, there will be a need to move from wild harvest to culture, a move that could benefit both man and sea.