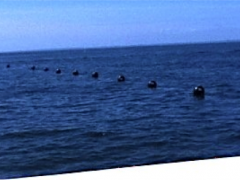 The genus Gracilaria, in the Phylum Rhodophyta (the red seaweeds), contains over 100 species found around the world, and many are wild harvested and cultivated for food and the phycocolloid agar.  Known as ogo or ogonori in Japan and Hawaii, Gracilaria is a popular ingredient in salads, usually sold fresh or salted.  Agar is a gel-forming polysaccharide extracted from the cell walls of Gracilaria species, and is especially important in the food and microbiological industries.  Gracilaria is a warm water seaweed, usually preferring temperatures in the 20-30°C range.  It is an ideal candidate for aquaculture due to its warm-water growing season, ease of propagation, relatively high growth rates, high tolerance to a range of environmental conditions, and its existing and potential commercial value.

Gracilaria has a variable morphology or structure, which differs by species, strain, and growing conditions.  It is a bushy, branching seaweed, comprised of rounded branches.  Blades are usually red, but can be brownish, green, or almost black.  Blades grow from a flattened disc that is formed from a spore.  Growth occurs in the apical meristem, located at the tip of each branch.  Blades can reproduce by making spores or by a process called “vegetative propagation”.

Gracilaria is an opportunistic species that has a wide range of tolerance for changing environmental conditions.  It is commonly found in estuaries or bays, often in intertidal or shallow subtidal areas, less than 1 meter deep, either attached to rocks or free floating.   It is often found in eutrophic areas, which are environments rich in nutrients and low in oxygen. Gracilaria species are euryhaline , which means they can tolerate a wide range of salinities, from about 10-40 ppt, though they grow best in the 25-33 ppt range.  They can survive temperature ranges from 10-35°C but have an optimal range of 24-30°C. 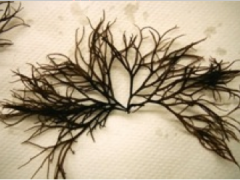 Gracilaria has a three-stage sexual reproductive life cycle called a Polysiphonia-type life history.  The three different stages are distinguishable only by microscopic examination of the reproductive structures. They include a diploid tetrasporophyte stage, a haploid gametophyte stage, and a diploid carposporophyte stage (occurring on female blades only) where the reproductive structures look like bumps on the branches. Gracilaria has an isomorphic (“same shape”) alternation of generations. This means that two of its three life stages, the tetrasporophyte and the gametophyte stage, are morphologically identical. Both the tetrasporophytes and the carposporophyte will produce and release spores.  These spores can be cultivated in a nursery for approximately 2-3 months to produce 1-2 mm plants that can be planted out in the sea, or in a tank system.

Gracilaria is also able to reproduce asexually, through vegetative propagation.  A single individual has the capacity to become hundreds or thousands of individuals, through a process called continual fragmentation.  Each time a fragment is broken of, it can grow and develop into a new individual. This is possible because growth occurs in the apical meristem, where the seaweed grows from the tips of its branches.  Each tip has the capacity to grow and branch into its own blade.  Vegetative propagation is the most common means of culture, since it is quicker, easier, and more efficient than starting from spores, and it allows for consistency, as all blades in a culture are genetically identical.  This is very important if the blades are being grown for a specific characteristic, such as agar consistency, specific morphology, or favorable growth rates and biomass yields. 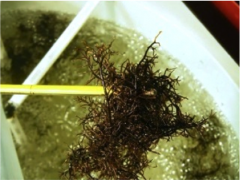 Gracilaria lends itself well to land-based tank culture.  Plants are free-tumbled using vigorous aeration, and can be continuously harvested and fragmented for a continuous culture.  Tank based culture can be a means of building up biomass for transplanting to lines in the sea.  Fragments are bundled together and attached to long lines and cultivated at 1-meter depth.  These bundles can be harvested several times in a season by trimming the excess growth and replacing the bundles.